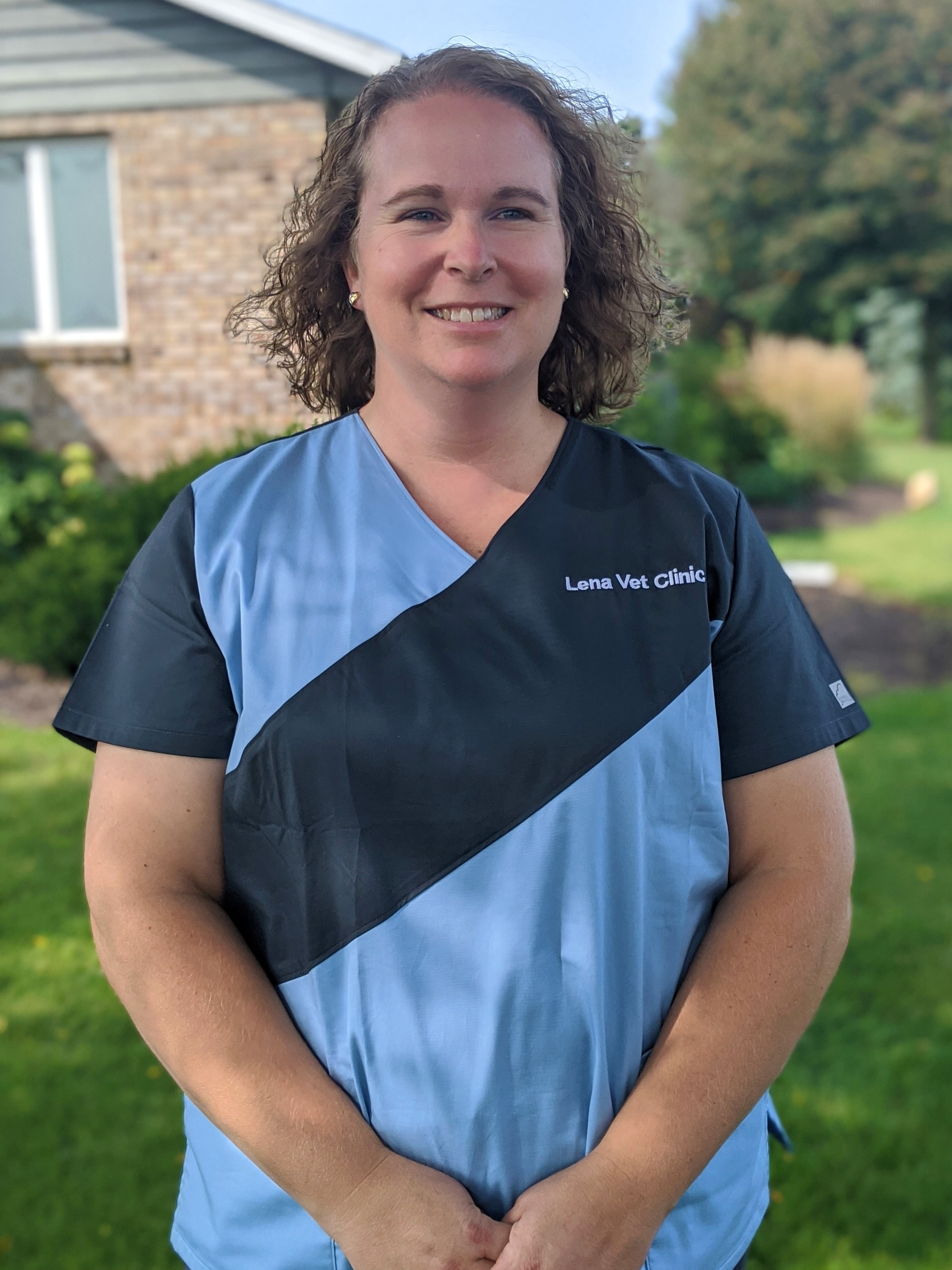 Alison Smith, CVT, grew up on a farm in the Mt. Morris area. She graduated from Joliet Junior College in 2005 as a Certified Veterinary Technician. Alison joined our practice in 2005 and is primarily the large animal veterinary technician. Alison is married to Albert and together they live in Leaf River on a farm with their daughter Alana, son Allan, three dogs, cows, and horses. Alison and her family enjoy horseback riding, camping, ATVing, and fishing. 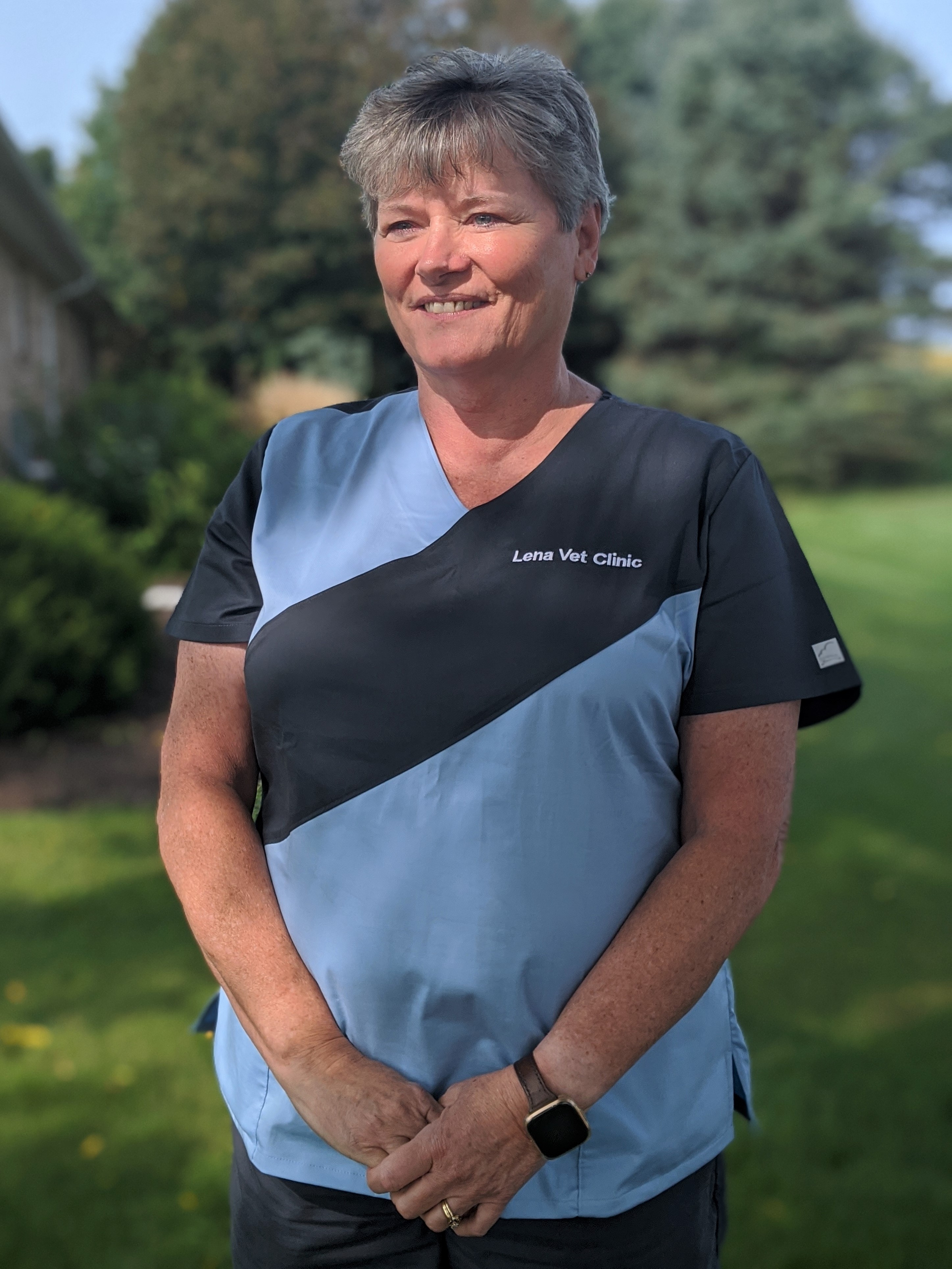 Vicki Schamberger grew up in the Pearl City area and studied accounting at Highland Community College. She started at the Lena Veterinary Clinic in October of 2002 and is our inventory manager. She lives in rural Lena with her husband Randy. Vicki enjoys antiquing, reading, gardening, knitting, and most of all, spending time with her grandchildren. 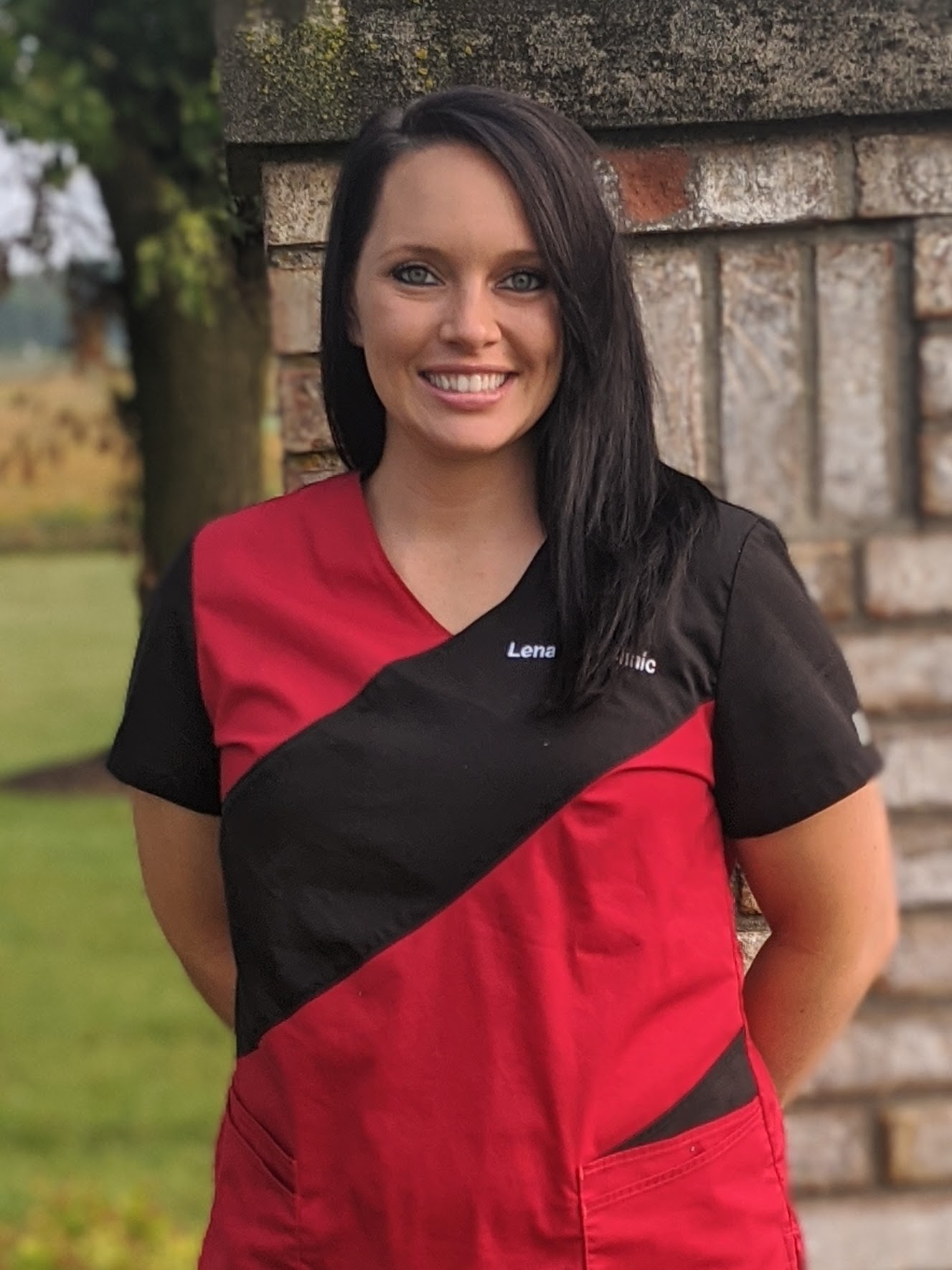 Misti Schweertman started working at the Lena Vet Clinic in October 2011. She is our office manager and large animal receptionist, but also enjoys assisting with small animal patients when needed. Misti grew up in the Freeport area and graduated from Highland Community College with her Associates in 2010 and received her Bachelor’s degree in Human Services from Columbia College in 2013. She and her family live in Forreston with their two dogs and together they raise and show sheep. Some of her other hobbies include traveling, reading, walking the dogs, and spending time with her family. 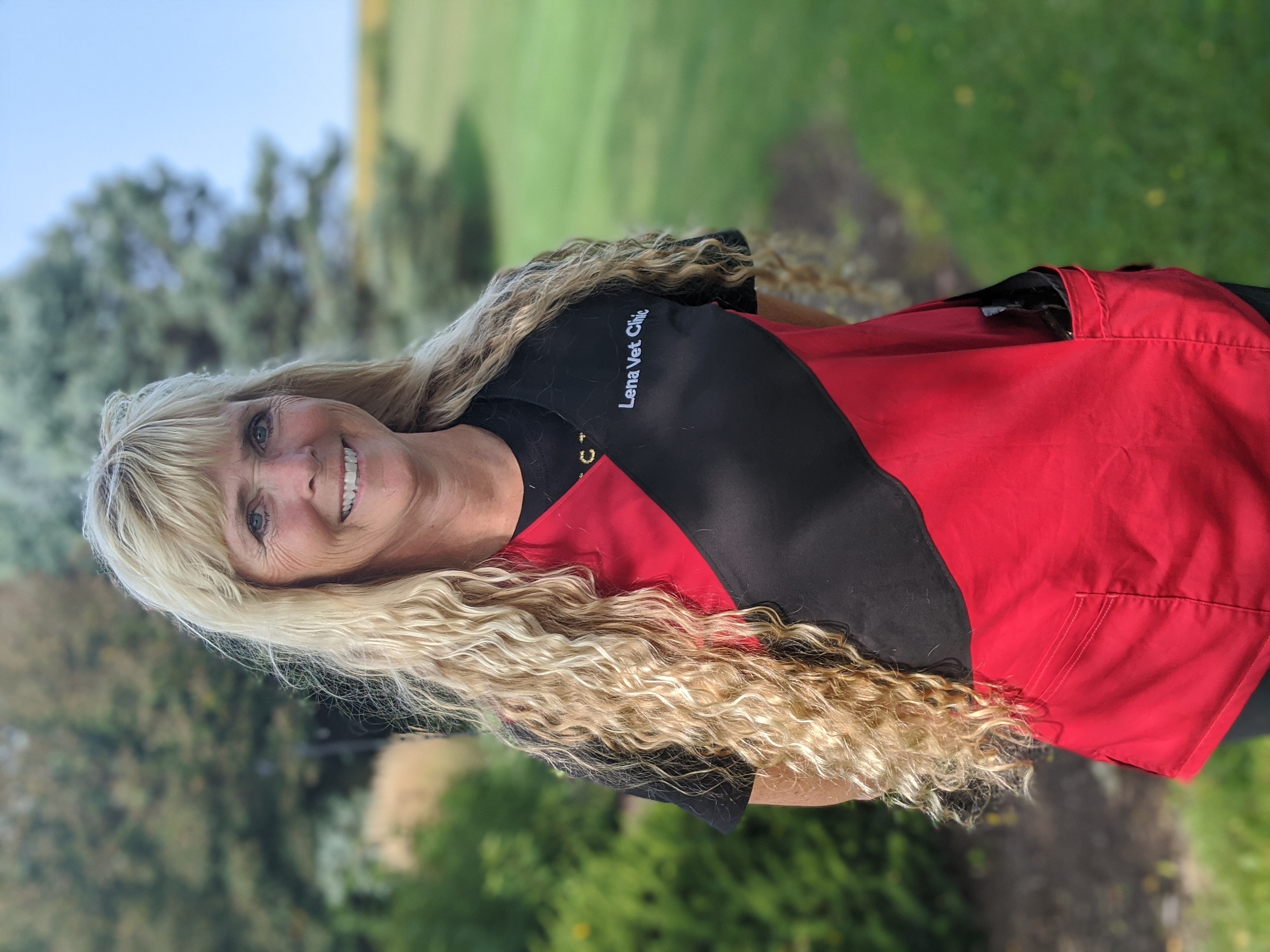 Kim Mehringer went to school in Naperville and moved to the area in 2003. She started at the Lena Veterinary Clinic in August of 2012 and has been bringing her animals here for the past 31 years. She is an animal lover and has dogs, horses, and a cat. Her hobbies included ballroom dancing with her husband, horseback riding, skiing, line dancing and hiking with her dogs. 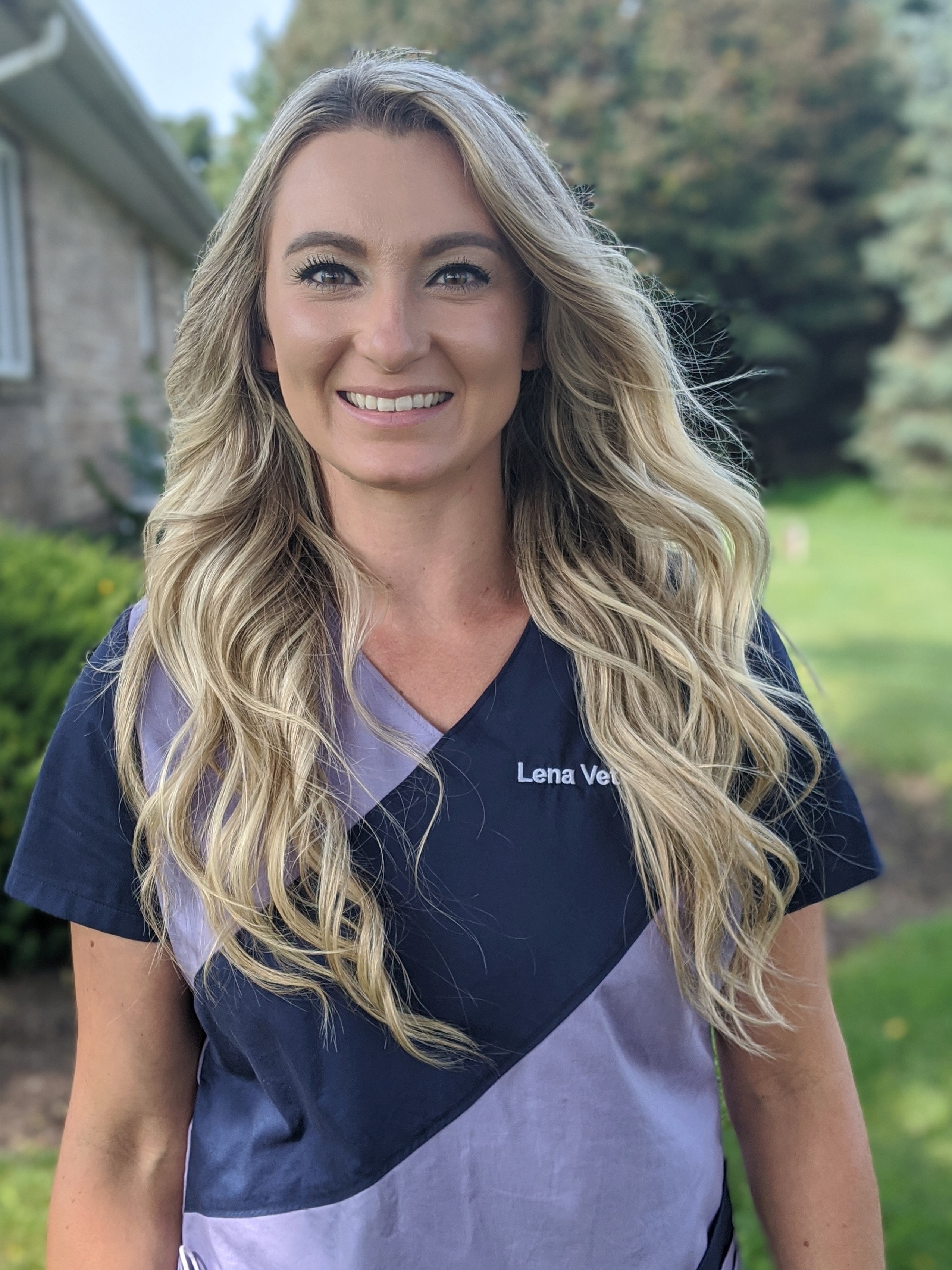 Kelsey Dunwiddie, CVT, grew up on a farm in Monticello, WI. She became a Certified Veterinary Technician at Globe University - Madison West in October of 2012. Kelsey now resides in Cedarville, IL with her husband Lance and her Rottie "Dez". She joined the Lena Veterinary Clinic in May of 2013. She works with both large and small animals at our practice. She enjoys walking her dog, cooking, watching sports, boating, and gardening. 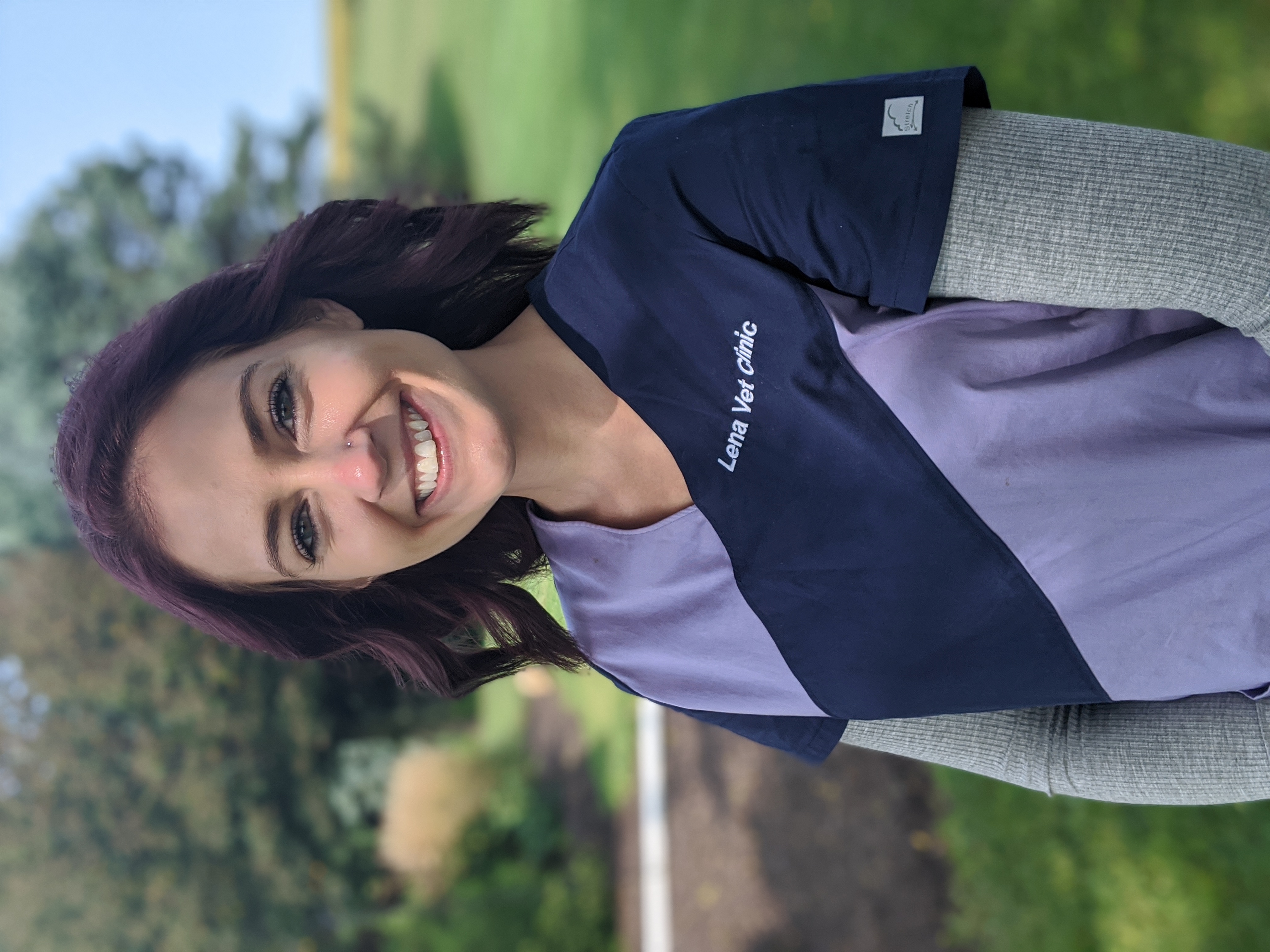 Courtney Miller, CVT, graduated from Freeport High School in 2010. She grew up in Freeport and became a Certified Veterinary Technician at Globe University-Madison West in June of 2016. Courtney now resides in Lena with her husband, four beautiful children, two cats, one rabbit, and two dogs. Her hobbies include doing fun activities or playing sports with her children, traveling, and having date nights with her husband at the winery. 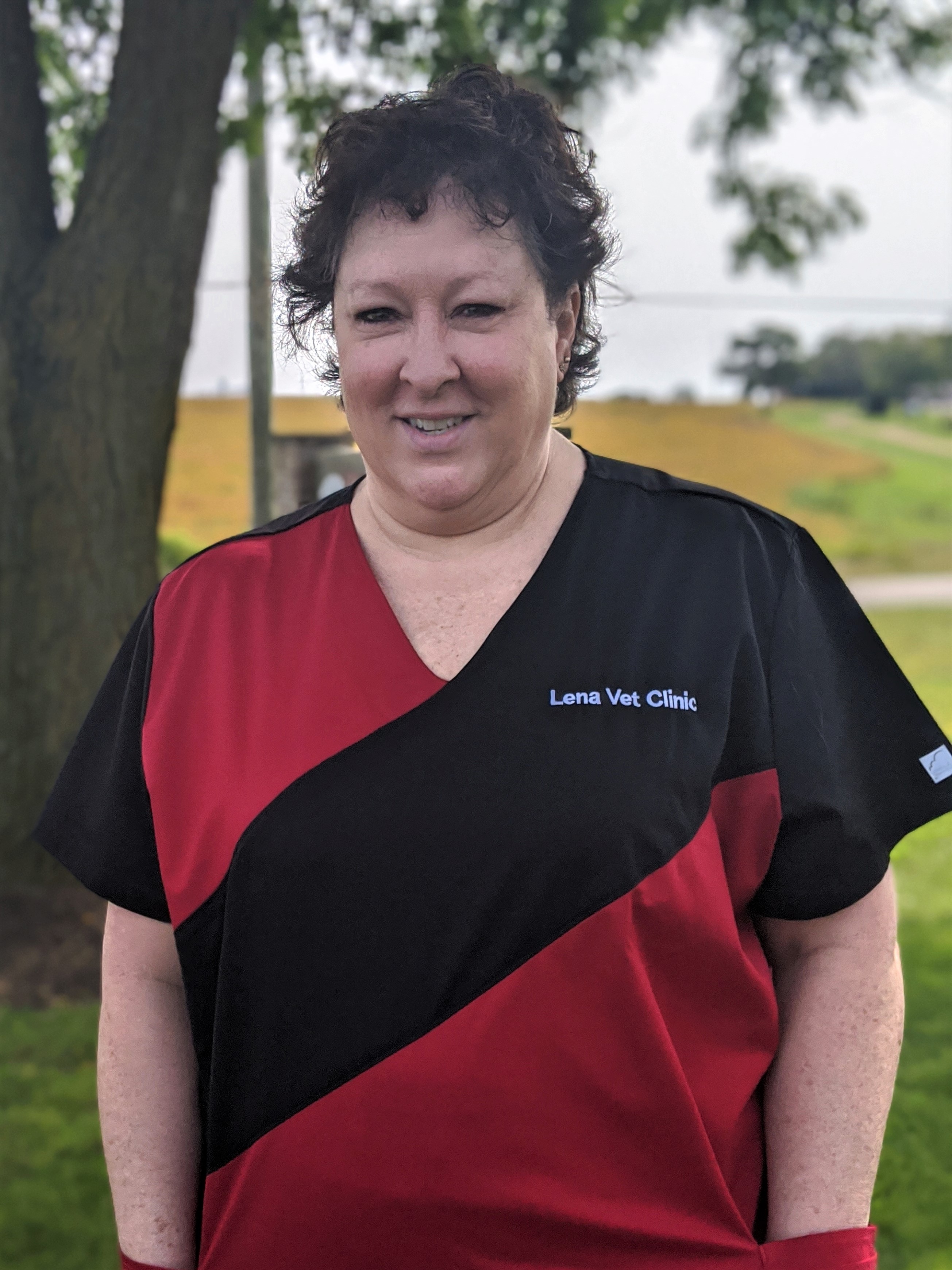 Colleen Kappes is our small animal receptionist. She has been working at the Lena Veterinary Clinic since August of 2003. Her job duties include answering phones, scheduling appointments and surgeries, and ordering small animal inventory items. She is originally from Freeport and currently lives in Stockton. Colleen loves working with all animals, but is a cat person. She has two children and four cats. 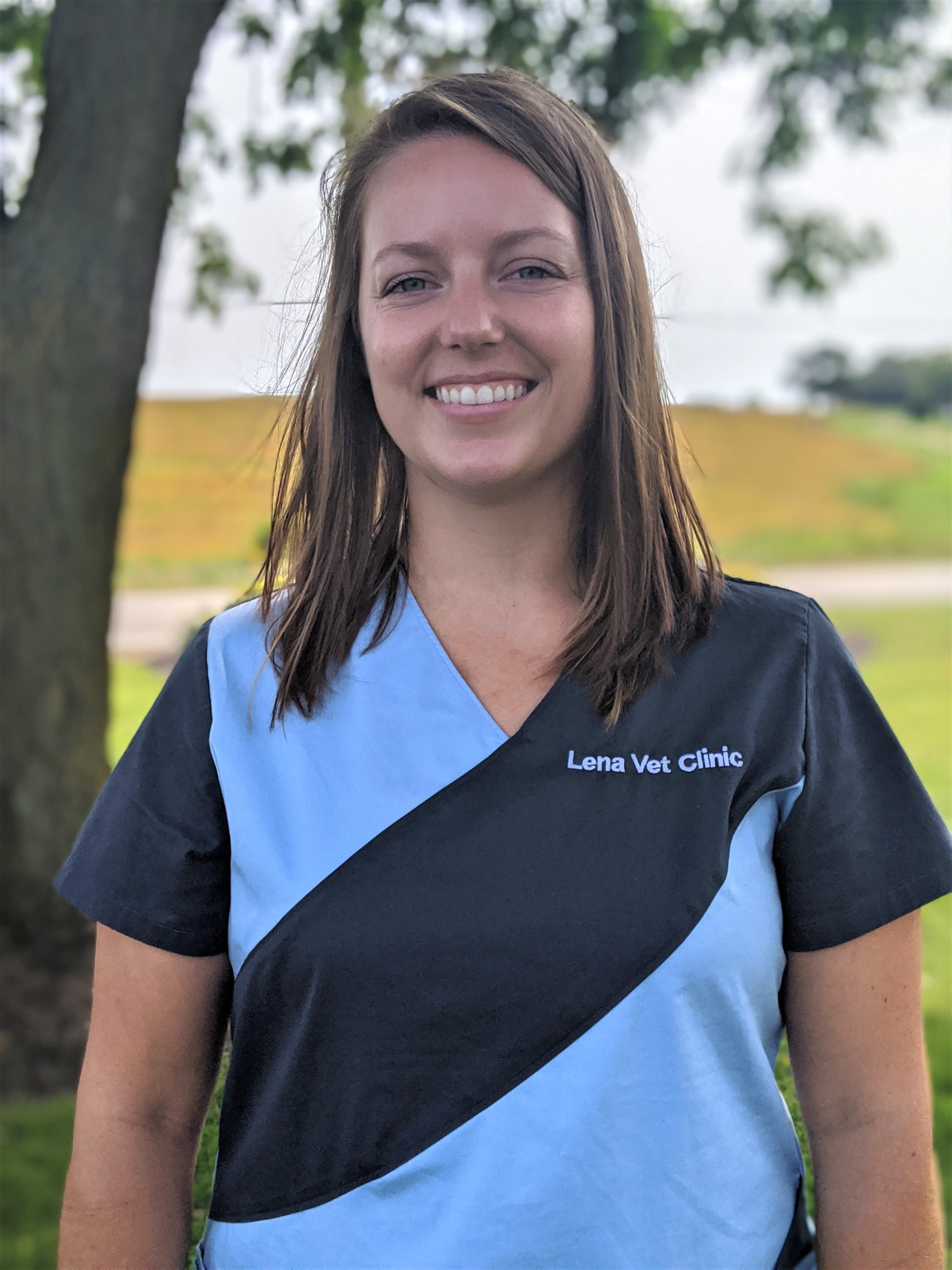 Emily Korf, CVT, graduated from Forreston High School in 2012. She became a Certified Veterinary Technician at Rockford Career College in March of 2017. Emily lives in Freeport with her beloved dog named Berkeley. She enjoys working with both large and small animals at our practice. Emily enjoys taking her dogs for walks and traveling. 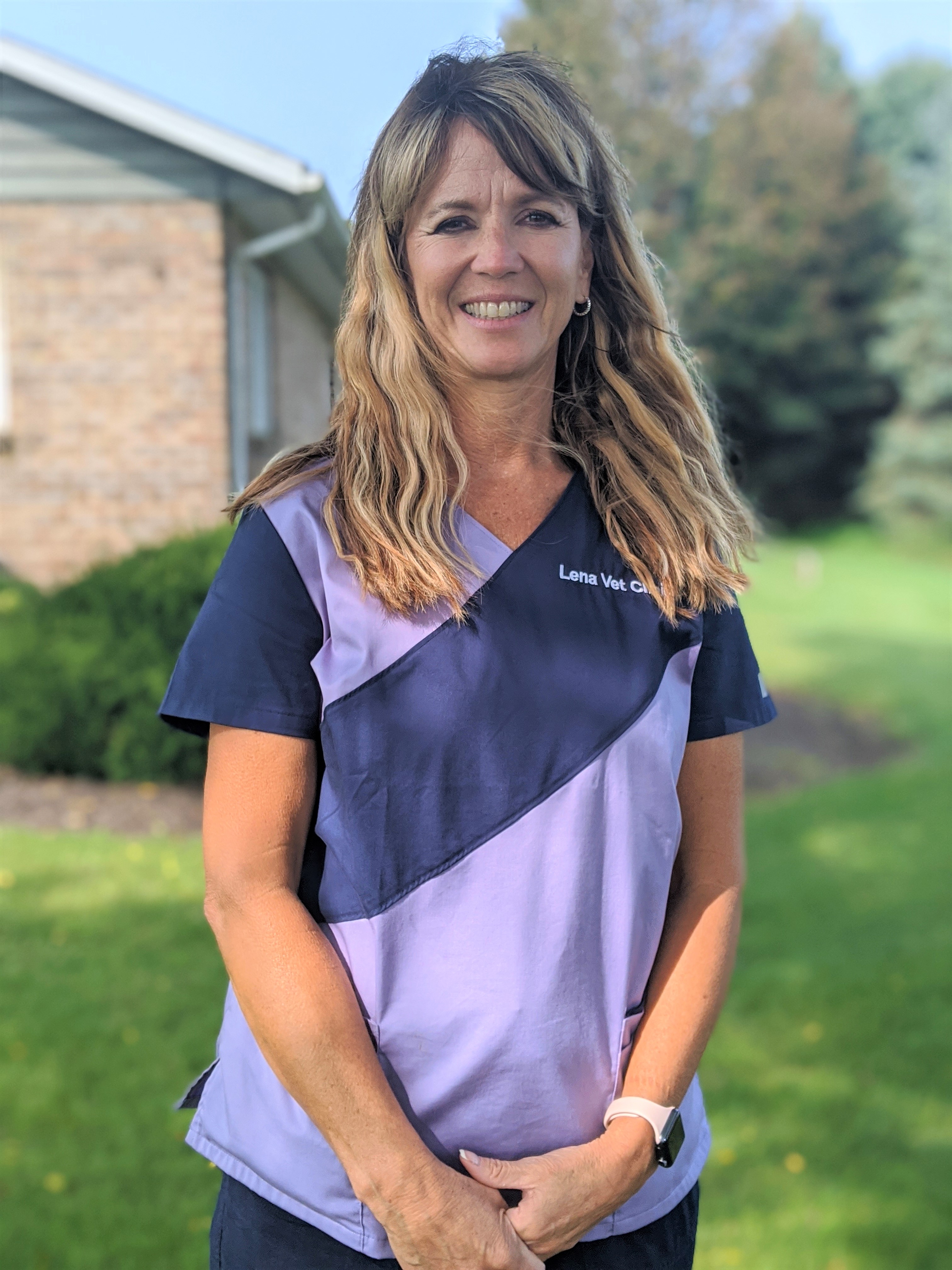 Jamie Holman fills many roles at the clinic, specifically working in the milk lab, covering both large and small animal phones, and working as a veterinary assistant. Jamie grew up on a dairy farm, just outside of Davis, Illinois. She and her husband now live on a small farm in the Freeport area and have 2 children, Jalen and Grant. Prior to joining our clinic, she worked in the banking industry for several years, then became a stay-at-home mom. Her hobbies are attending Grant’s sporting events, watching her daughter show dairy goats, baking apple pies with her mother, horseback riding, kayaking, and boating. 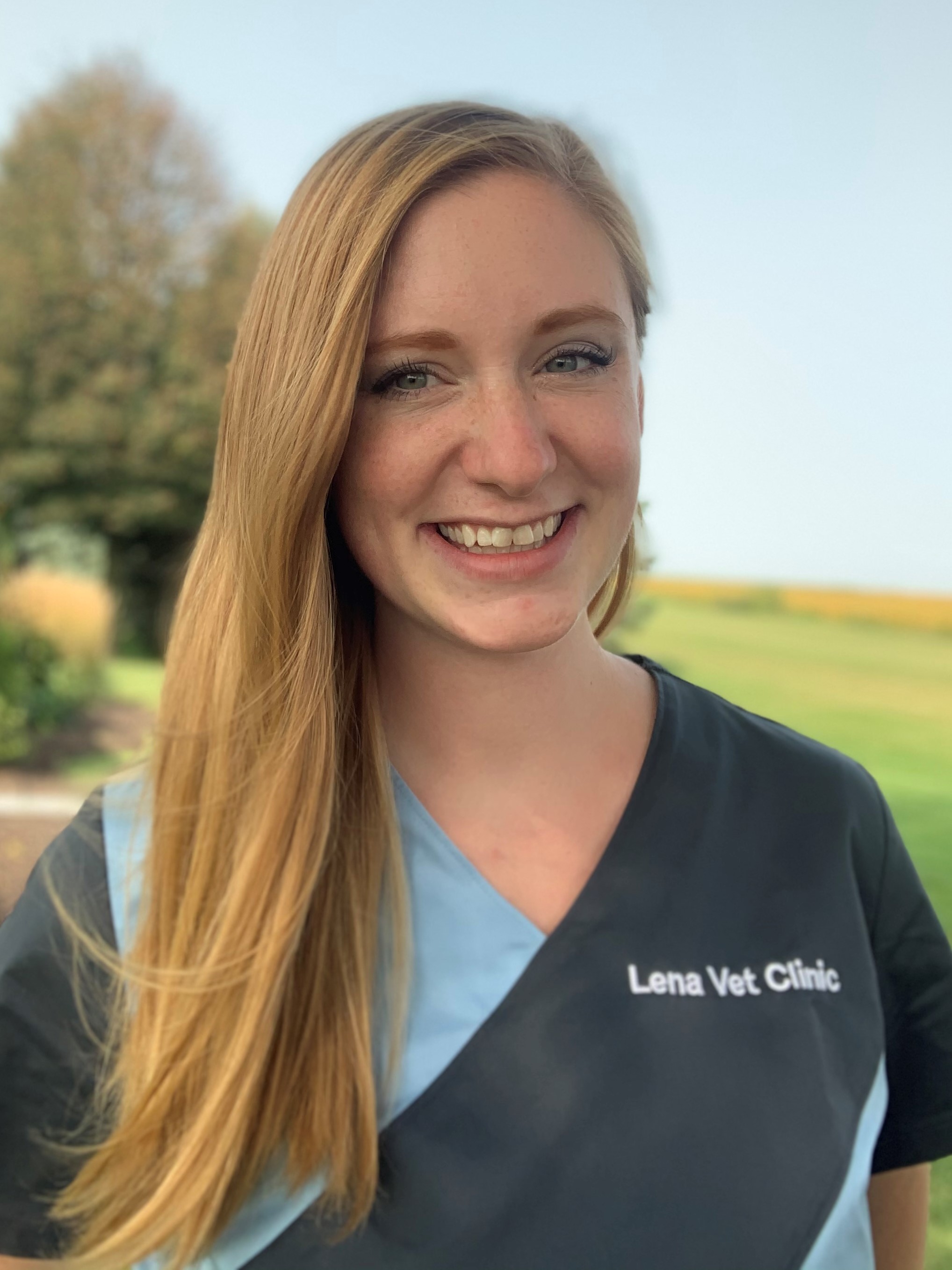 Jessanna Darin, CVT, started at the Lena Vet Clinic in December of 2016 after graduating from Rockford Career College. Jessanna is originally from Rockton, but now lives in Durand with her husband, Nathan - and a baby on the way! Like many of our staff members, Jessanna has several roles at the clinic including assisting with small animal appointments and surgery, large animal chute work, and working in our milk quality lab. Jessanna was previously a CBRN Sargent in the Army National Guard for 6 years. She and Nathan have many pets including 2 dogs (Stella and Rosie), 2 cats (Whisker Biscuit & Fleching), and several chickens. Her hobbies include art, kayaking, and spending time with her many animals. 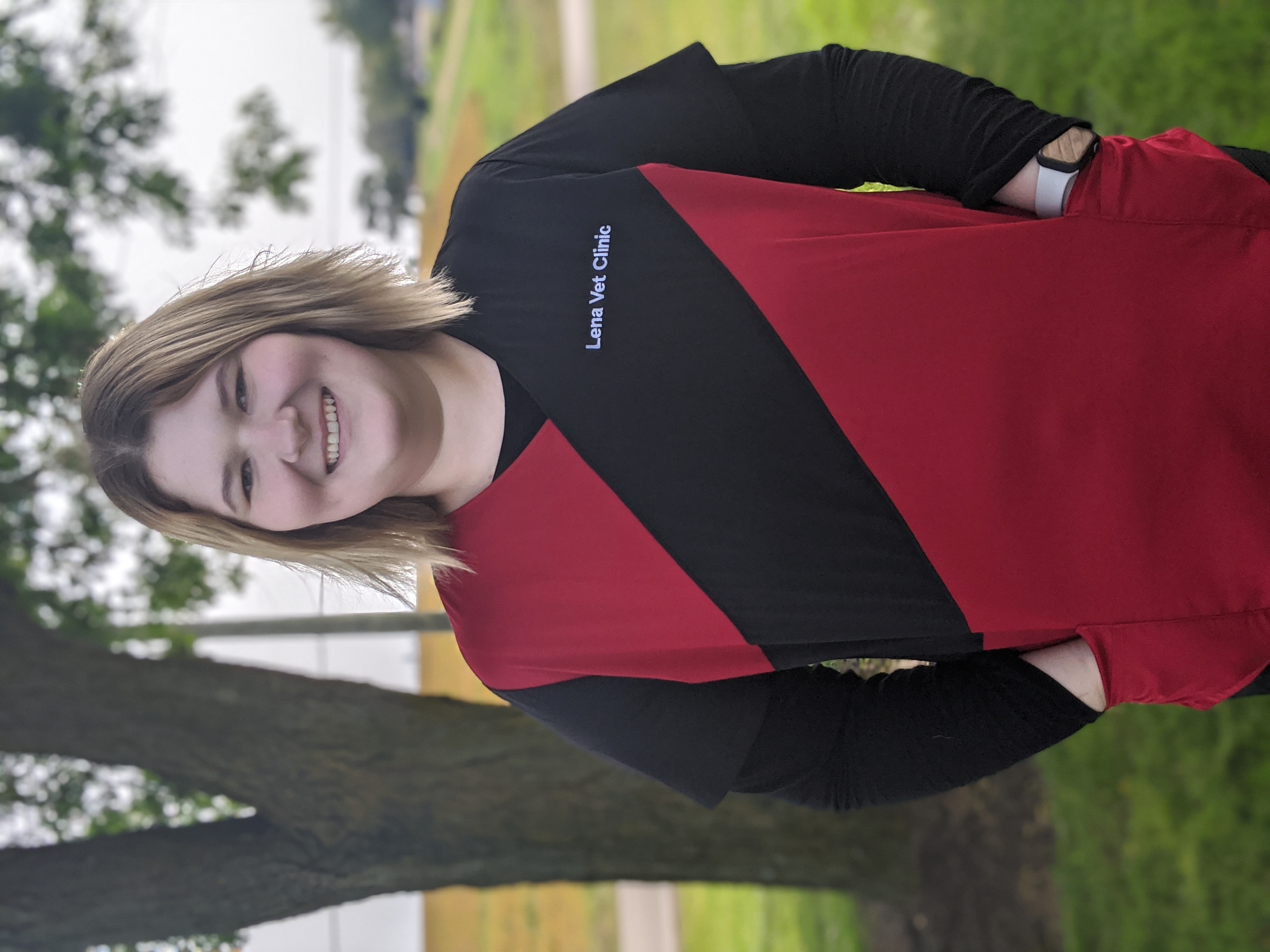 Taylor Young, CVT, graduated from Rockford Career College in 2019 and, after completing her externship with us, was hired in September 2020 as a full time vet tech. She grew up in Ridott and currently lives in Freeport with her variety of pets: cats, dogs, snakes, a lizard, chickens & ducks. Her hobbies include reading, learning new things, painting, and making soap and candles. Taylor is passionate about all things small animal, but especially animal nutrition and surgery; in fact she will soon be a Certified Pet Nutrition Coach!

Danielle Miller began working at the Lena Vet Clinic in June 2021. She has mostly inventory and veterinary technician responsibilities throughout the clinic. Danielle grew up in New Jersey where she graduated from vet tech school at Bergen Community College. She and her husband, Paul, live in the Freeport area with their horses, cats, dogs, and fish. In her spare time, Danielle enjoys gardening, horseback riding, boating, and spending time with her animals.